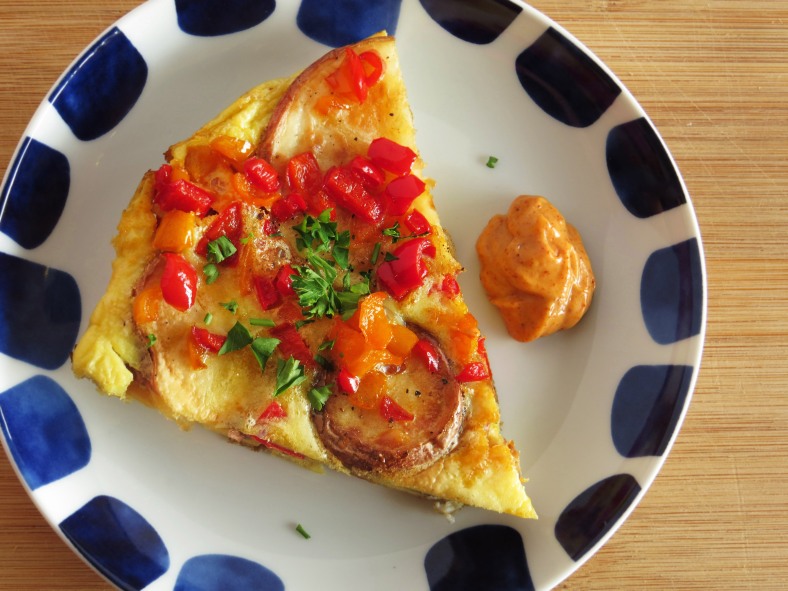 The first time I met her, I thought she looked like a gypsy. She wore a neon orange peasant skirt that skimmed the floor when she walked, the objects inside her overstuffed sequined purse rearranging themselves with every step. Large silver hoops dangled from her ears. She flashed a wide smile, revealing a tiny and endearing gap between her two front teeth.

“I’m Tia!” She exclaimed, extending her arm for an anemic handshake our friend Bethany would someday lecture her about improving. It was probably the only weak thing about her. In the nine years that have passed since than moment in our college dorm, I have become well-acquainted with the ironclad opinions and unshakable resolve of Therissa (to me, forever “Tia”) Johnson.

Her platinum level of not-giving-a-shit is evident the moment you step foot in her car. Items we have found inside: a prom dress, a bookshelf, one purple satin glove, a forgotten carton of eggnog (in April), a copy of Entrapment (in the passenger side door for 5 years straight), and Jimmy Hoffa’s body. (Just kidding about that last part. But she traded it in before I could confirm it wasn’t there.) Try to talk her out of anything—be it another margarita or another dog—and she will roll her eyes to the corner of the room, letting off a little laugh that says “Thanks, but I probably won’t listen to you.” It is maddening. And to this people-pleasing perfectionist, utterly enviable.

Not that I’ve ever stopped trying. In fact, I tried to talk her out of cooking this very meal. We were on spring break with ten friends on the Outer Banks of North Carolina. I was in charge of the cooking, but Tia insisted on making dinner one night. As we roamed the unfamiliar aisles of a Food Lion, I asked her what she planned to cook.

I envisioned the dozen of us, stomachs growling, politely passing slightly burnt circles of dough around the table.

“That’s…it?” I tried to hide my skepticism, but Tia wasn’t buying it.

“Oh, and stuffed tomatoes,” she added before gliding away with the cart.

It wound up being the most memorable meal of the week. These Spanish tortillas, as Tia makes them, reflect the most powerful aspects of her personality. She deep-fries the potatoes in batches, using more olive oil in ten minutes than I do in two months. She does everything on the stovetop, which requires a precarious and sometimes failed flip of the half-cooked egg. Extravagant, messy, authentic. Just like Tia.

The last time she made them for me, we were crammed in her kitchen to celebrate the purchase of her first house. Guests stood elbow-to-elbow around a bowl of guacamole, eyeing the clock (really, we were starving) and the spewing vat of oil on Tia’s cluttered stovetop. A friend of her roommate—a nice guy with long, dark eyelashes—is following her around the kitchen, moving pieces of mail away from the burners, mopping up her oil spills, fishing shells out of her eggs. He stays in the kitchen long after the party ends, until every dish is clean and every counter wiped. His name is Dominic and today he marries my friend.

To Tia, my gypsy girl who is about to be both a wife and a mother: thank you for expanding my world and teaching me to loosen up.

To Dominic: the unfortunate task of telling Tia when she’s wrong now falls to you. (Good luck with that.) Thanks for not letting her burn the house down.

To both of you: Good luck and congratulations! Happy wedding day! 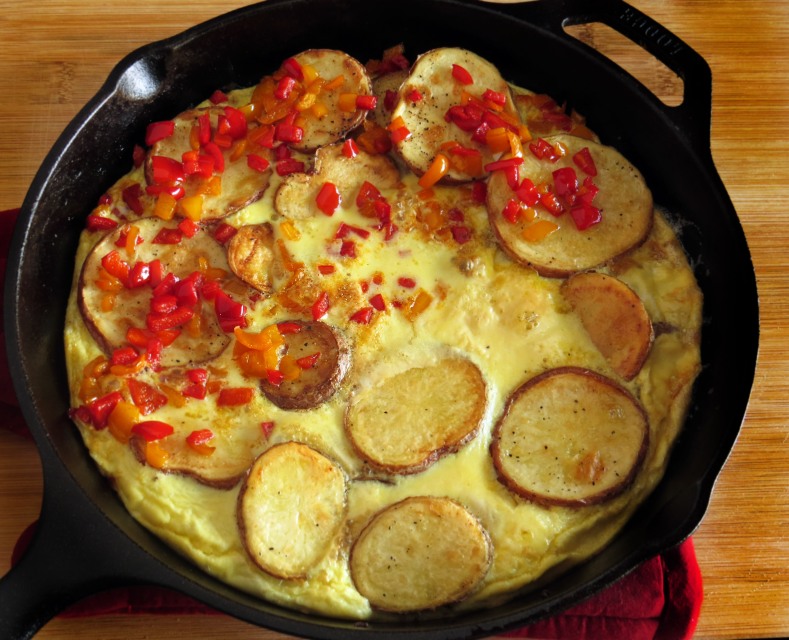 Tia’s version is more authentic; the potatoes are peeled and deep-fried and the tortilla is cooked on the stovetop, requiring you to flip it halfway through. I might attempt a recipe with one of those despised components (peeling, frying, flipping), but when Jason started requesting “Tia’s tortilla thingys” I had to Chelsey-fy it. Spoiler: The “aioli” isn’t authentic either, but it’s quick and easy—and exactly what Tia serves with her messy masterpieces.

For the spicy garlic “aioli”:

Preheat oven to 425° with rack on lowest level. On a large rimmed baking sheet, toss sliced potatoes with 1/4 cup olive oil until thoroughly coated. Arrange potatoes, cut sides down, in an even layer; season with salt and pepper. Place on lowest oven rack and bake until the bottoms of the potatoes are golden and slightly crisp, 15-20 minutes. When bottoms are done, turn on the broiler and toast 3-4 minutes longer, until tops are slightly browned. (Watch the potatoes closely in this step; if your oven is more powerful, it could take less than a minute!) 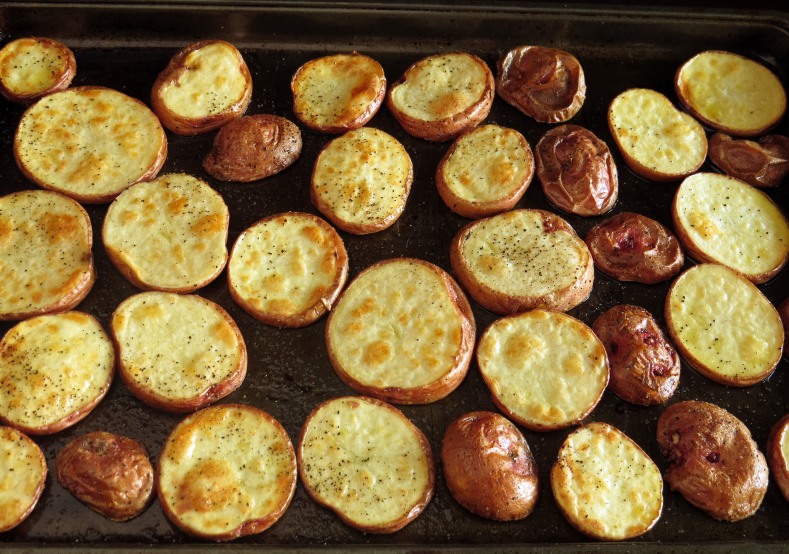 While the potatoes are baking, make the aioli by combining mayo, 1 teaspoon olive oil, and spices in a small bowl. Whisk until smooth.

When the potatoes reach their final five minutes of baking, heat a 12-inch cast iron skillet (or another flat-sided, oven-safe pan) over medium heat. Add 1 tablespoon olive oil and diced vegetables; cook until vegetables soften slightly, 3-4 minutes. Remove from pan and reduce heat to low. Crack eggs into a medium bowl and whisk until thoroughly scrambled. 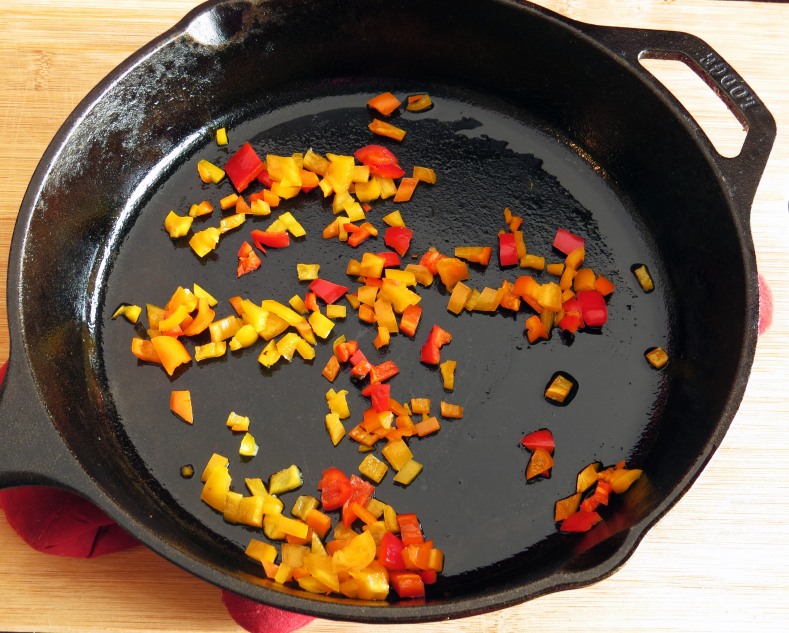 When potatoes are finished, transfer the potato rounds to the skillet. (You should wind up with about two even layers.) Pour eggs over the potatoes and top with diced vegetables. Cook over low head until edges begin to firm, about 5 minutes. Transfer pan to oven and broil 3-5 minutes until top is set. Slice and serve with a sprinkle of parsley and a dollop of aioli. 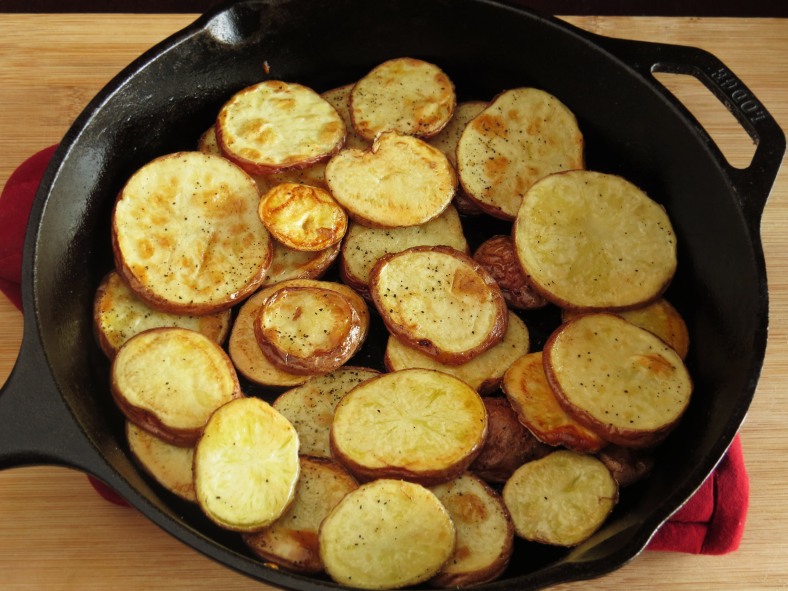